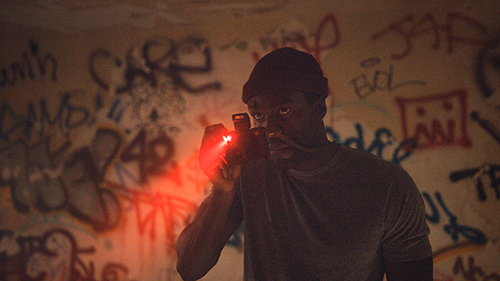 This week's blood-curdling horror sequel Candyman reunites us with one of cinema's scariest boogeymen. The legend of Candyman states that if you say his name five times into a mirror, he will appear to wreak hook-handed vengeance. And in the follow-up to the original 1992 shocker, Chicago artist Anthony (Yahya Abdul-Mateen II) delves into the notorious urban myth with terrifying and gruesome results.

Top Boy director Nia DaCosta and Oscar-winning Get Out and Us director Jordan Peele have united to bring us this latest iteration of Candyman. If you need to be brought up to speed with the Candyman mythology, here's our spoiler-filled examination of five important scenes from the original film. Dare you say his name five times?

In the original movie, adapted from Clive Barker's short story 'The Forbidden', it's stated that Candyman began life as the son of a 19th-century slave. A gifted painter, Daniel became infatuated with a white woman acting as his subject, and eventually got her pregnant. The girl's father then took horrific revenge, assembling a lynch mob to saw off his hand before eventually smothering him with honey and allowing angry bees to sting him to death. (We see this play out in the awful 1995 sequel Candyman 2: Farewell to the Flesh, where it's revealed Candyman's original name was Daniel Robitaille.)

The legend states that Candyman's ashes were then scattered over the area of land that became Chicago slum Cabrini Green. (Barker's original story takes place in the slums of Liverpool.) This is the basis of the legend later investigated by grad student Helen Lyle (Virginia Madsen), who discovers an impoverished, drug-ridden neighbourhood wracked with terror over the apparent existence of Candyman.

It needs to be said that the latest Candyman movie presents a twist on the original legend. In the 2021 film, a man hands out candy to young children – candy that contains razor blades. This results in his appalling torture and death at the hands of the local police. His vengeful spirit then manifests to take vengeance on all those who say his name. It demonstrates how urban legends are, themselves, mutable, and prone to corruption and change over time. That said, original Candyman actor Tony Todd is set to make an appearance (we hear his voice in the trailer), so there are clearly more puzzle pieces to slot into place.

The overly-inquisitive Helen is building her grad thesis around urban legends, spurred on to some extent by the dismissive attitudes perpetuated by her husband Trevor (Xander Berkeley) and his male colleagues. She and her friend Bernadette (Kasi Lemmons) want to see if the original Candyman legend has any kind of basis in reality, which brings them into contact with Cabrini Green resident Anne-Marie McCoy (Vanessa Estelle Williams).

Anne-Marie has a young son named Anthony and, like her neighbours, lives in a perpetual state of fear because of Candyman. However, at the same time, the Cabrini Green residents use the mythology of Candyman as an escape from their terribly blighted surroundings, putting faith in the existence of a higher power, no matter how terrible.

Upon closer investigation, Helen discovers a shrine to Candyman with an especially terrifying mural depicting his gaping mouth. There's also the presence of the Shakespeare quote "sweets to the sweet" from Hamlet, alluding to the inevitable spectre of death.

In the new Candyman film, some three decades later, we return to the landscape of Cabrini Green. The older Anthony has returned to the area, now gentrified, with his girlfriend Brianna (Teyonah Parris), only to find that the local inhabitants are still plagued by the same old urban legend.

Helen appears to debunk the legend of Candyman, albeit unwittingly, when she is violently assaulted in the Cabrini Green communal toilets. She's attacked by a man passing himself off as Candyman, which results in the individual's arrest. Normality apparently restored, Helen is then visited by Candyman himself, who points out that she has discredited his mythology and must now become part of his story.

She then blacks out and awakens in Anne-Marie's apartment in Cabrini Green where she's implicated in the death of young infant Anthony, now missing. Incarcerated in a psychiatric institute, Helen finds the tables have turned on her when both Trevor and the investigating authorities deny any credibility in her story.

This pattern of behaviour is repeated in the new movie when Anthony mimics the mistakes of his predecessor. Attempting to assimilate the legend of Candyman via his latest art installation, Anthony instead brings spine-tingling evil down upon his head.

During the climax of the original movie, Helen discovers that Candyman hasn't, in fact, killed Anthony. He's instead holding him in his lair, and plans to sacrifice the child on a massive bonfire that has been constructed by the inhabitants of Cabrini Green. This is Candyman's way of strengthening and perpetuating his infamy, but at the last minute, Helen manages to remove Anthony from danger, sacrificing herself and inviting Candyman's rage.

One imagines that the adult Anthony, as featured in the new movie, is blissfully unaware, at least initially, of his connection to Candyman. Otherwise, why would he investigate it? In the trailer, we see his mother Anne-Marie imploring him not to say "that name", while also stating that "he has a plan for you". This seems to imply that Candyman has unfinished business with Anthony stretching back decades (this might explain the presence of Tony Todd even when a new Candyman figure takes centre stage).

The original Candyman film ends with a shock stinger as the deceased Helen returns to kill the philandering Trevor. She has embraced her destiny and become the new iteration of Candyman, with the potential that she, herself, will live on in infamy.

In the new film, Anthony appears to be absorbed by the spirit of the killer (whether it's Todd's Candyman or the other incarnation remains unclear at this stage). It's a clear continuation of the original's urban legend theme, suggesting that the role of victim remains malleable even as legends themselves remain invincible and enduring throughout the generations. There's also a credited role for Helen herself, played by Cassie Kramer as opposed to Virginia Madsen. Exactly where she fits into the story is one of the sequel's most intriguing propositions. But can the sequel possibly match the first movie's malevolent atmosphere and potent shock factor? We'll find out soon enough.

Click here to book your tickets for Candyman, opening in Cineworld cinemas on 27th August.