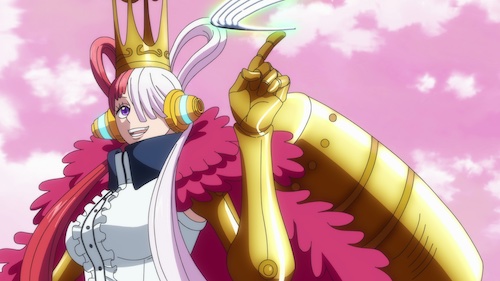 One of the world's biggest manga serials is about to burst onto Cineworld screens in a riot of colour, character and action.

One Piece Film: Red brings one of Japan's most successful and popular exports to a Cineworld near you. Scroll down to find out more.

What is the story of One Piece Film: Red?

Uta is the most beloved singer in the world. Renowned for concealing her own identity when performing, her voice has come to be described as "otherworldly". Now, for the first time ever, Uta will reveal herself to the world at a live concert.

One of Uta's biggest fans is One Piece hero Monkey D. 'Straw Hat' Luffy, leader of the rogueish brigand known as the Straw Hat pirates. As the venue fills with more of Uta's fans, the voice that the whole world has been waiting for is about to resound.

At the start of the movie, Uta is shocked to discover she's the daughter of 'Red-Haired' Shanks, the notorious pirate and swordsman. Like Monkey D. Luffy, Shanks is another familiar face from the annals of the One Piece franchise. Watching how Uta responds to this revelation, in line with coming out as a sensational singer, will make the movie a memorable experience for dedicated One Piece fans.

One Piece Film: Red is the fifteenth feature film in the celebrated One Piece series, which is based on the manga of the same name written and illustrated by Eiichiro Oda. Acclaimed as one of the greatest mangas of all time, the publication has broken numerous records, including one for the best-selling manga sold between 2008 and 2018.

Do you really want to miss the sensation that is One Piece at Cineworld? We thought not. Keep reading to discover how your One Piece big screen experience is set to be mind-blowing. Is One Piece Film: Red showing at Cineworld in IMAX?

Yes, you can witness One Piece Film: Red in IMAX at Cineworld.

The eye-popping visual dimensions of the manga are set to become all the more extraordinary when projected in IMAX. The movie's IMAX presentation utilises dual projection, greater screen expanse and integrated digital surround sound. It invests greater warmth and digital clarity into Uta's world, not to mention that of her allies and enemies.

Here's the IMAX poster for the movie. Find out more about the unique qualities of the IMAX experience at Cineworld in the following video.

Is One Piece Film: Red showing at Cineworld in 4DX?

Yes, One Piece Film: Red is also getting the 4DX treatment at Cineworld.

4DX is a unique sensory experience that's exclusive to Cineworld cinemas in the UK and Ireland. Moving seats and motion bring to life the manga's arresting visuals and quirky characters. Meanwhile, scents and immersive effects, including wind and water, will augment the stunning reveal of Uta's true identity.

Check out our behind-the-scenes video that delves into all the fun secrets of 4DX. Where can I book tickets for One Piece Film: Red?

Want more? Scroll down to watch the extravagant trailer for One Piece Film: Red and get ready for the biggest manga experience of the year.

Ant-Man and The Wasp: Quantumania trailer breakdown and key reveals